My trip to Little Corn was more then slightly ironic. I spent 3.5 weeks in Nicaragua, and most of my time was spent taking classes and studying. Towards the end of my classes I decided to spurge a bit and go to an island in the Caribbean, Little Corn. After my research the island seemed exactly the place I was looking for: small, low key (there are no cars or roads on the island), beautiful beaches, good diving, paradise. So I spent $100 and 48 hours and arrived on the island ready to relax….. apparently the universe and I were not on the same page. It was stormy and I was sick the entire time I was on Little Corn.

One day after my arrival I started to have a severe headache. I woke up more than 4 times that night with a splitting headache, feeling like someone had taken an ice cream scope to my eye balls. The next morning I was feverish, nauseous, and weak. I had just enough energy to walk across the island to get a massage before returning to my room to sleep the pain away. Two days of headache and then a rash started. By this time I had to leave the island. I had three days on the island and all of them were spent sick, while it stormed and rained outside. Thankfully, while on the island I befriended a lovely lady, K. K was on the island coordinating volunteers and after seeing me in my misery went out of her way to help me. She monitored my symptoms, “looks like chikungunya (a mosquito virus similar to zeka) “, helped me get off the island, and made sure I was doing alright whenever she could; every time I travel my faith in humanity is restored.

So, $400 and 5 days later I left the island covered in a head to toe rash and joints filled with temporary arthritis. So much for a vacation 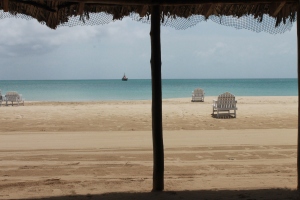