Wait, what day is it?

It has been two long, hard days. Unable to truly sleep on the 8 hour flight, my sleeping pattern is all messed. However, this is the only time I have ever seen two sunrises and one sunset in the same “day”. All were beautiful, yet incredibly different.

The sunrise over the Atlantic Ocean was the most unique. At first, dark colors painted the sky. First red, then orange, yellow, green, and the blue, yet the colors did not mix, each were a defined strip untouched by any other color. Then as the sun rose, the colors shifted, mixing, lightening. It was one of the most breath taking views I’ve ever witnessed.

Upon my arrival in Madrid the exhaustion took over my mind, and I had gone a little loopy. Thankfully, I was able to find my dad who had (unsurprisingly) made a new friend who also happened to be in the same Spanish program as me. From there, we attempted to find our next gate, a task much harder then first thought. At first the flight wasn’t posted on the boards, and we had to wait until an hour and a half until it was up on the flight board. When the flight finally appeared on the board there was not a specific gate, we only knew it could be in gates J K H. Mind you each letter had about forty possible gates. Finally, 30 minutes before our flight was to board the gate was posted and we arrived just fine.

Seville is absolutely breath taking. Old buildings with incredibly detailed designs line streets that are so small our taxi almost scrapped the walls. At one point we had to do a 6 point turn to fit around a hairpin curve in the road. The streets wind and turn throughout the city enticing you to get lost.

My dad and I arrived to this quaint little hostel, unpacked, changed, and then headed out into the city. As we wound around the streets we began to hear the faint playing of an accordion, and as we followed the music we stumbled onto a breathtakingly beautiful scene. Small cafes, bars, and shops lined the colorful streets with tables, chairs, and umbrellas. Amazing iron and paster work decorated the tops of the red, orange, yellow buildings.

All the people we’ve met have been incredibly nice (except the ladies who forced us to let them read our palms and then demanded money) and I can already see an improvement in my Spanish. We stopped and ate at a small Tapas bar and had some interesting food before retiring to our hostel for nap. Soon we are going out and exploring again. There is so much to do in this beautiful city, I may never come home:)!

The two dogs in the hostel, ready to attack any visitor! 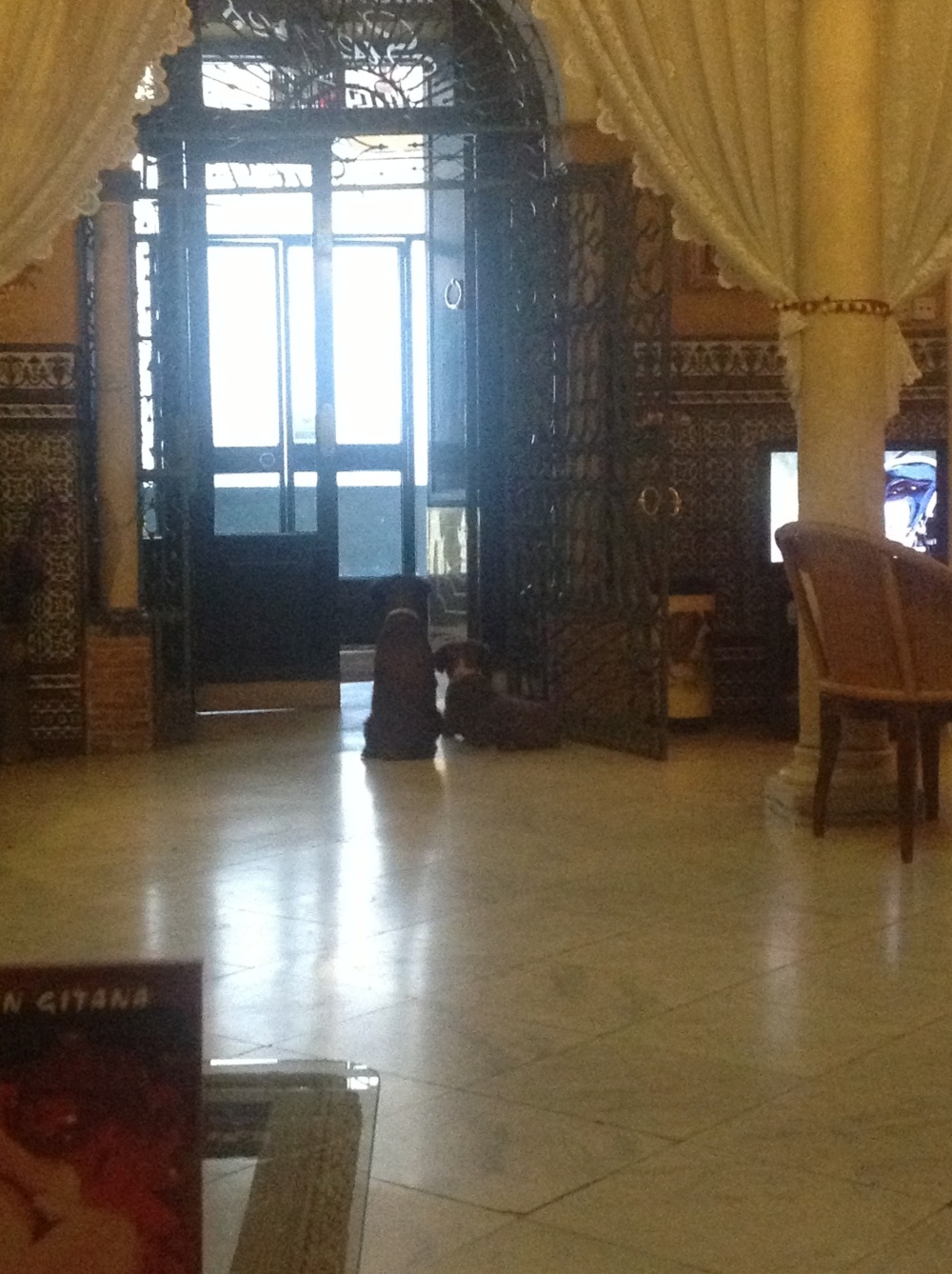